Thimmakka wants to be born as a tree in her next birth..... 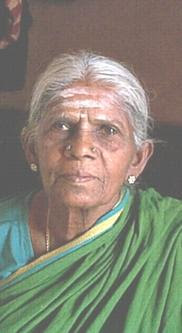 SALUMARADA THIMMAKKA, the woman who planted banyan trees as her life's mission along the Bangalore-Nelamangala highway, is certainly not a household name in the "happening" metropolis. For, she went about her selfless work for 45 years without any fuss or publicity. And, of course, she never called herself an environmental activist, though she planted and painstakingly watered and nurtured some 400-odd trees, along with her husband, Chikkaiah.
Thimmakka is a storehouse of knowledge on environment and knows all there is to know about agriculture. This is not unusual in agricultural communities, where the woman not only takes care of the household but also plays an active part in the entire agricultural process. Ask Thimmakka about trees, and she will name some 25 species in one go, and will also tell you why they have to be planted.
But what egged Thimmakka on to take on the extraordinary task of planting 400 trees?
"I longed to have children, but couldn't. My husband felt that we should make up for it by `parenting' trees. He believed that it was a work of great Punya, and would do us good. He used to tell me it would also fulfil my desire for motherhood. Believe me, nobody ever told us to do this. It's our own thinking that put us on to it," says Thimmakka, explaining the circumstances.
But this meant that Thimakka and her husband Chikkaiah had to walk about three kilometres from their home in Huligal to the highway, along which they had decided to plant trees. They couldn't afford to buy saplings either. So, they cut branches off banyan trees and planted them in a row. During the first year, they successfully planted 10. But their task did not end there. The couple drew water from the village well, trudged the three-kilometre distance, and watered the young plants. "I would carry two pitchers, one on my waist and one on my head, and my husband would carry one on his head." They did this round the year, except during rainy season.
Moreover, protected the growing plants from grazing cattle by fencing them with thorny shrubs. They actually felt like anxious parents, until the plants took root and began to grow! "We planted more, increasing the numbers to 15, 25, and more." Neither Thimmakka nor her husband ever found the need to keep count of the trees they planted. It was only after she got recognition that the Government started counting them.
Life had never been easy for Thimmakka. Her husband had a tiny piece of land on which they grew ragi. It was barely sufficient for them. She worked in fields, carried stones to construction sites, dug drains, besides other backbreaking jobs. All that she earned was taken away by her mother-in-law.
Towards the late '80s, her life grew more complicated when her mother-in-law had a stroke and brother-in-law took seriously ill. "It was a traumatic phase of my life. I had to give them bath, feed them, and even clean their shit," she recalls. After prolonged suffering, both passed away. Soon, Chikkaiah also took ill. Cousins came and took him away on the pretext of nursing him to health, though all the while, they had intentions of claiming the small piece of land he owned.
Chikkaiah also died soon. "I felt I had been stripped off my clothes," she recalls, tears in her eyes. "There was nobody for me, no money, nothing..." Worse still, her dilapidated hut began to crumble. There was no roof over her head and no walls around her. All she had was a gunnysack to lie on. The few vessels that she had, she gave them away to her neighbour. "This Sankranti, it will be 13 years since my husband passed away. I haven't planted a single sapling since then."
It was not as if she was too depressed to continue the task, but just that there were too many practical problems. There was nobody to help her cut branches and plant them, and with what little she earned, it was impossible to spend money on plants as well.
But things did change for her, when Prajavani correspondent N.V. Negalur, realised the tremendous significance of Thimmakka's work. He not only broke the story of the couple's 45-year effort, but was far-sighted enough to write out applications to the departments concerned, both at the Central and State level. Several awards and recognition came her way. "I have a whole lot of prizes, I have no place to keep them. I have put them all in a plastic bag and kept them in the attic," says Thimmakka in a matter-of-fact tone.

Original post : Thimmakka wants to be born as a tree in her next birth.....
Posted by Unknown at 16:16

Email ThisBlogThis!Share to TwitterShare to FacebookShare to Pinterest
Labels: Thimmakka wants to be born as a tree in her next birth.....