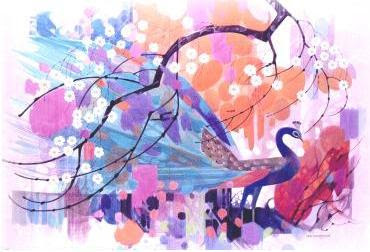 तस्मिन्नन्द्रो कतिचिदबलाविप्रयुक्त: स कामी नीत्वा मासान् कनकवलयभ्रंशरिक्तप्रकोष्ठ: ।
आषाढस्य प्रथमदिवसे मेघमाश्लिष्टसानुं वप्रक्रिडापरिणतगजप्रेक्षणीयं ददर्श ।।
A certain Yaksha who had been negligent in the execution of his own duties, deprived of his powers on account of a curse from his master which was to be endured for a year and which was onerous as it separated him from his beloved, made his residence among the hermitages of Ramagiri, whose waters were blessed by the bathing of the daughter of Janaka and whose shade trees grew in profusion. (1)
That lover, separated from his beloved, whose gold armlet had slipped from his bare forearm(as he became thin due to separation), having dwelt on that mountain for some months, on the first day of the month of Ashadha, saw a cloud embracing the summit which resembled a mature elephant playfully butting a bank.