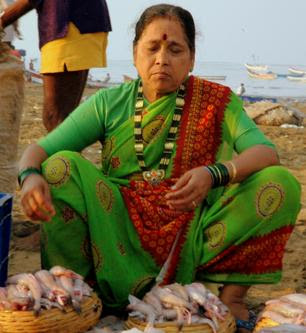 The above picture is of a fisherwoman from my very own city, Mumbai. Since India is surrounded by sea be three sides, we have large population that basically prefers sea-food in their daily meals. And therefore fisher community has a special position in our society.
In the state Goa, it is said that the people are so mad for sea-food that when Lord Ganesh comes to their house for 1.5 or 5 days, they have to be strictly vegetarian as per rituals. But on the last day, they bring a bag full of fishes and place it outside the back door and as soon as Lord Ganesh leaves the house from the front door, this 10th Avatar of Lord Vishnu (i.e. Fish) enters their house from back door.
Though I'm totally vegetarian by birth but I can imagine this madness and also the beauty of fish marvels me, specially the eyes. In India, many girls are named "Meenakshi" which means the (beautiful) eyes of the fish (Meen= Fish and Aksh = eyes).
The other thing that attracts me is a splendour of the fisherwoman. Their ornaments, sarees, style of wearing it, it's design, blouse and their language as well. Also the fisher community in Maharashtra (Koli) is famous for their group dance.
The fisherwoman is the symbol of independence and decision making. Since the husbands are high seas for capturing fishes, the fisherwoman has to sell fishes and look after the house as well. Usually they bring fishes in the large basket which they carry on the head and sell it either home to home or by sitting in the market.
I always see these women traveling in the crowded trains in the peak-hours where entering the train compartment especially with large basket in really a difficult task but they do it everyday. And then each day they have quarrel with regular commuters since regular commuters expect them to travel by the luggage compartment which is also highly crowded. This quarrel usually ends up with the slang language used by fisherwomen for which they are quite famous.
But as a linguist, I can understand the reason behind the slang language. Usually husbands of these fisherwomen are on the high seas for weeks. And in India, husband is supposed to protect and take care of the wife life-long. But since he is unavailable and also everyday there is a long tour to do in order to sell fish, there is no protection available particularly from rogues and rascals. Therefore the slang language and fury is the part of their personality.
However, fishermen language has special place as a colloquial language in Marathi and it is playing a big role to survive Marathi mainly against the global attack of English language because of which Marathi language is diminishing fast. I think that only colloquial languages will help to survive the root languages.
The second unusual thing of these Koli women is that they always wear large number of pure gold ornaments which are traditional and unique. Sometimes they even wear gold ornaments weighing a kilo or more. Their thick fish shaped earrings are very special and it could be of 100 grams at a time. As per tradition it is Stree-dhan (Woman’s own treasure) and it comes hereditary generations to generations from mother to daughter and it is saved particularly to use in the calamity for the family.
No chain snatcher or thug, even in the crowded railway stations dares to touch it. As she or he if caught will be assaulted first by the language and then by the hand where one hand strike will be enough to hospitalize that chain snatcher.
Therefore today, on the first day of Navaratra festival, I’ll say that a fisherwoman is the symbol of strength, the Goddess Amba, Durga, Chamunda, Kalika, Bhavani, Jagadamba or Renuka.
I bow to their courage and independence.

Email ThisBlogThis!Share to TwitterShare to FacebookShare to Pinterest
Labels: The fisherwoman