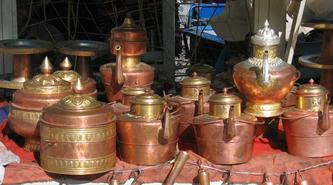 Once upon a time there was a village called "Aanandpur". In that village there lived a miser called Dhandas (Slave of the money). Very next to him, there lived a man called Dhoortmati (Cunning minded). Both were not satisfied with their income. So both of them used to cheat people and try to extract money from them as much possible.
One fine day, Dhoortmati thought that why not he should cheat Dhandas. His cunning mind started planning since it was not easy to cheat a person like Dhandas. And he got an idea.
Next morning he had gone to Dhandas and told him that he needs two small but similar vessels since he will have some guests at the night and also promised Dhandas to return the vessels in good condition. Dhandas did not believe him and asked for Rs. 20/- as a cautionary money. Dhoortmati shown unhappiness but gave him the deposit and brought that vessels home.
Next day Dhoortmati did not turn up in the morning. Dhandas was happy that these Rs. 20/- was now belonged to him. But in the evening Dhoortmati came to his house with 2 vessels of the last day and a very new vessel comparatively small in size.
Dhandas was curious and asked about the third vessel. Dhoortmati said that last night the wife vessel delivered this baby vessel when they were fast asleep. Only his wife woke up hearing the cry of labour pains and helped the wife vessel to go through the hardships.
All were happy to see the child’s birth in the house after so many years and his wife asked Dhoortmati to give the rest to the baby as well as baby’s mother. So he brought the vessels back in the evening.
Hearing all this, Dhandas was very happy though he knew that in reality no vessel can give birth to another vessel. But it was the greediness that blinded him.
Some days later Dhoortmati again come to Dhandas and asked if could spare some vessels as there are guests again in the house. Dhandas not only gave him 2 big and heavy vessels willingly but also did not take any cautionary money since he was sure that in return, he is going to gain something more.
Next day when Dhoortmati did not turn up, Dhandas was sure that destiny is really smiling at him as he is going to get a healthy and strong baby in return.
Days passed on, there was neither the sign of the original vessels and nor the baby vessel. But as said, the hope is mad which keeps the person waiting. Nearly after a month when Dhandas became impatient, had gone to Dhoortmati asked about the vessels and the expected baby.
Dhoortmati said in sorrowful voice that his mother vessel died in labour pain and father vessel also died as he was grief stricken due to wife and baby’s untimely death.
Dhandas did not believe it and ran to the king with the hope of justice. The king ordered Dhoortmati to attend the court. Dhoortmati explained the king the history and asked the king that if the vessels can give the birth then why they cannot die?
King not only agreed to his plea but made him foreign minister of his kingdom.

Original post : The baby vessel
Posted by Unknown at 13:02

Email ThisBlogThis!Share to TwitterShare to FacebookShare to Pinterest
Labels: The baby vessel