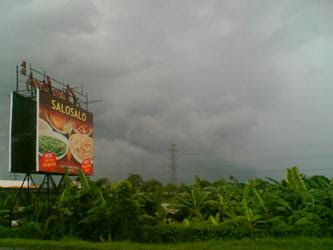 Yesterday at my place, it was the first rain of the season. Early evening there were lightening strikes. Later it started raining. Everywhere, it was a fragrance of soil (मृद्-गन्ध) which occurs after the first rain in the summer on the hot earth.
The place I live costal, adjacent to the sea. The weather is hot and humid nearly nine months a year. Day starts with sweat and hot breezes. Usually, temperature is between 33° to 42° Celsius.
In winter it comes down to 20° Celsius in the night. Therefore one can understand the importance of rain in our life. We wait for rain as much as the farmer in our country waits for it.
The rain here is heavy and stormy. Sometimes it continues for 2-3 days non-stop. Previously Mumbai was the group of seven islands. The rainwater, no matter how much, used to merge into sea. But later these seven islands were attached to each other by dumping soil into sea so sea’s capacity to take water lessened. Also Mumbai’s population now reached 15 million. Therefore, now it is pressurizing sanitation systems, gutter systems and when it rains, there is a heavy water logging.
Especially, those who come from the interior part of India, do not have experience of continuous heavy rain, floods, water logging and traffic jam. Also in heavy rain there is very less visibility since black clouds covers the sky. Due to water logging people sometimes have to spend there nights on the railway stations. Just like being underground at the time of heavy bombing in war times.
Ones I had stuck in the other part of city with my distant grandmother in who never saw so much rain in her life. We spent night at my mother’s friend and that night my brother came from the office to my house walking for 5 hours through the water upto chest high.
Since I live in the heart of the city, every year we have guests who stuck in the rain and some of them are unknown to us. Once there were 50+ guests. There was a girl who was just married and came to Mumbai for the job. Her in-laws were in Nagpur. She never saw the rain like this in her life time. She was highly frightened. She called my cousin who was her colleague. He called my brother and gave her whereabouts which was just 3 stations away and my brother had gone and brought her to our house.
Same thing happened with my father’s college time friend’s daughter. She was working in up town and due to rails were not functioning she called her father. In such a situation, males can spend their time sleeping on the platform but it is difficult especially for girls and women. They feel awkward. Her father called his 2-3 friends and found our telephone number and asked us to fetch her.
These 50+ people were there in our house for 3 days and our daily program was playing cards and eating. Every year we enjoy such guests. Our house is like having a sprout.
And not only us but every original Mumbaait enjoys this. Other time people may not share the seat with forth passenger in the local train, even will be ready to throw you out of the train on the platform due to the crowd. But in heavy pour, people stand on the road and provide water, tea, food, blankets and even money. Otherwise people sitting in the posh car will look at pedestrians as ignorable thing but when rain plays havoc they will share the car, will give lift upto your place though it is far away from their destination.
The temples, schools will spare space, bed-sheets and food for the voyagers. Some even share their mobile phones so that people can contact their loved ones.
This is Mumbai, the financial capital of India, ready to do anything to earn money. But when calamity comes it becomes one family. The people who usually bargain for 2 rupees of vegetables with the vendor will give 100 rupees smilingly to the unknown. Because they know, thy need is greater.
Original post : The rain
Posted by Unknown at 13:07

Email ThisBlogThis!Share to TwitterShare to FacebookShare to Pinterest
Labels: The rain