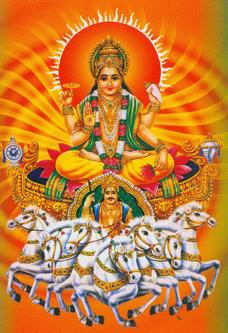 In my religion, Hindu according to it's mythology there are 330 million Gods and still the number is increasing as God is the concept for a good soul, an idol. Therefore there are new Gods coming up like Veer Birasa Munda, Saint Dnyaneshwar, Saint Thiruvalluvar, Buddha, Mahaveer etc.
There are many disciples, many faiths, many rituals and many philosophies about God in India. Some worship Lord Ganesh, Some Lord Shiva, Some Lord Vishnu, Some Lord Buddha.
But I like the Sun God the most. That is because you have to go to temple to see the other Gods while the Sun is the only God who comes to your doorstep everyday. Every morning he comes with a smile and a new day.
Also in Sanskrit other name for the Sun is Mitrah (The friend). Indeed he comes to your bed like a friend every morning, tickles you with his soft hands and suggests you to get up and start your day.
The Sun is a bright, strong with unlimited energy. It is said in Hindu Mythology that one who worships the Sun receives the strength to fight every odd. Now it is proved that early morning rays gives Vitamin D and prevents rickets, alzheimer and osteomalacia.
According to great researcher and freedom fighter Lokmanya Tilak, the "Arya" were living in Antarctica. Therefore the Sun is the special and most important God in Vedas also.
It is said in mythology that the Sun is an ornament of the sky and it has a Golden Chariot and Seven Green horses. It is a Royale King and he produces the universe and the bio-living habitat. Also he has strength to destroy all kinds of diseases.
When I see the flag of Germany I feel that the black colour in it represents the dark night, orange the early morning before the sunlight and yellow rather golden colour the colour of sun / new day.
There is a famous verse about the sun in our litterature :
The sun in the sky travels everyday with all odds against him, like a chariot with one wheel, seven horses trod by serpents and the driver without legs. Great people don’t depend on their accessories for their achivements.
(Rathasyekam chakram bhujagayamita saptaturangah niralambo margaha charanarahitah sarathirapi. Raviryartevantyam pratidinammuparasya narabhasyah kriyasiddhi satve bhavati mahatam nopakarane)
So true, isn't it?
Original post :My favourite most
Posted by Unknown at 17:55

Email ThisBlogThis!Share to TwitterShare to FacebookShare to Pinterest
Labels: My favourite most