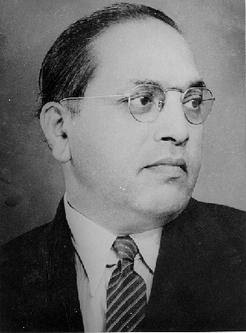 I live in a tiny village of Mumbai City, Dadar. Yesterday over 1 million people visited it to tribute the great person called Dr. B. R. Ambedkar on his death anniversary.

He was a person who came from poor, downtrodden family which was a victim of casteism because the race of his family was of untouchables.

Overcoming numerous social and financial obstacles, Ambedkar became one of the first untouchables to obtain college education in India. He went on to pursue higher studies in the United States and England, where he earned law degrees and multiple doctorates for his studies and works in law, economics and political science. A famous scholar, Ambedkar practiced law for a few years before he began publishing journals advocating political rights and social freedom for India's untouchables. Leading numerous public agitations, he would become an undisputed political statesman of the Indian Oppressed classes.

He worked hard, earned the knowledge and became a lawyer and first maker of independent India's constitution. It was not a simple job to be an architect of Indian Law system as India is a vast country with many religions, disciplines, faiths, many customs and traditions. Since he came from lowest level of society he was well aware about the problems of grass-root people.

His work was as good as Martin Luther King, George Washington, George Washington Carver and Abraham Lincoln. Because of him today Indian people are enjoying constitutional freedom especially the women and downtrodden people of India.

I'm writing this here proudly because I know his contribution to woman of India in the constitution of India. But unfortunately some people from higher castes, some of my relatives speak sarcastically about him and his followers. This is too bad. We cannot underestimate a contribution of a great person like him just because he is from the backward class.

Some people from my village say that those who visit his memorial create sanitary problem by coming so much in number. I have a question for them. The sanitary problem is harmful to nature but the plastic pollution made by so called higher society is far more harmful and everlasting than this.

It is high time for India to forget the religious, regional & linguistic differences, casteism to bring up the nation. For that let us start from ourselves.

In Yajur-Veda, 4000 years ago it is said that let us come together, let's eat together, let's think uniquely. The Vedas are well-known for their high values. We must follow this idea of universal brother hood.

The link to read more about Mr. Ambedkar : http://en.wikipedia.org/wiki/Ambedkar

I found myself in one of those 1 million people who saluted Dr. Ambedkar for his contribution to the society and the nation and the mankind as a whole.

Email ThisBlogThis!Share to TwitterShare to FacebookShare to Pinterest
Labels: A salute to...