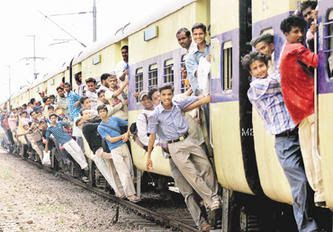 There was a latest survey about young generation taken by the MTV international, a famous music channel. It was taken in 14 different countries. These 14 countries included in the survey were Argentina, Brazil, China, Denmark, France, Germany, India, Indonesia, Japan, Mexico, South Africa, Sweden, the UK and the U.S.

In this survey MTV found that Young Indians are happiest while Japanese youth is the most miserable.
[The links:
http://www.merinews.com/catFull.jsp?articleID=123782&catID=7&category=Lifestyle
http://in.today.reuters.com/news/NewsArticle.aspx?type=topNews&storyID=2006-11-20T063528Z_01_NOOTR_RTRJONC_0_India-276984-1.xml
http://www.stat.columbia.edu/~cook/movabletype/archives/2006/11/immigration_and_1.html
http://hindustantimes.com/news/181_1848976,0008.htm ]
It is really a true thing that youth in a developing country is twice happy than that of developed country.
As far as India is concern I feel that this is because of two main reasons:
1) Religion - The Indian religions are peaceful, gives the message of love and contentness. Because these religions are not spread through sword or destroying the races, the majority people love each other. Overall there is a communal harmony. There is no unsure about life because of next person. Also Indian religions highly respect the others' religions. So there is no hatred for the next person on religion basis.
2) Indian Cinemas - On and average Indian Cinemas (Bollywood) is pro non-violence, optimism, gentle, Humor and light comedy w.r.t to highly sexy, crimeful, fightful abroad movies. Indian Cinemas are musical also. You will rarely find here the movies with violence and cruelty. The movie like "Lage raho Munnabhai" spread the message of Gandhi-ism through the comedy.

Therefore the Indian youth is happy-go-lucky, optimist and enjoys the life.
I read many blogs of the foreigners who are fan of Indian movies and they like overall impact of Indian movies on their life. Though Indian movies may not be technically superb but they are emotionally touching. They teach how to live the life and why to live the life.
I still remember the film "Thodasa Rumani Ho jayen (Let's be some romantic)" few years ago.
The heroin of the movie is Anita Kanvar who is simple looking and plain living. She lives in a small town and thirty years of age. She is skilled in repairing, cooking and other routine activities. But she is slight masculine in her behavior and tough.
Unfortunately she is still unmarried which is a subject of discussion and astonishment for that tiny town. She does not care around their taunts.
That year there is no rain in that village where the farming is based on rain-water. Every common man is worried because of that. The life overall is dreary.
Here Anita also feels that since she is not good looking and she does not have feminine abilities she is rejected by everyone while other girls from that village are getting married easily. The dry, non-raining situation in the village making her gloomier day-by-day as well.
Suddenly one evening Nana Patekar comes at the door. He says that he is a traveler and he wanders village to village. He contains many skills like to fly in the air, to know other's mind, he can make spectacles which see through other's heart, can give medicine on any kind of disease etc. and the rain will come to this village if he invites. For that he will need just 5000 rupees.
As she is very sad she doesn't believe any of his words and rejects his offers. But her father is a positive minded and says that if his 5000 rupees could bring happiness in that village than there is no good thing like that.
Nana Patekar ask them to perform some rituals and through that he changes their mood from sadness to romantic, happy and cheerfulness.
The best thing I like about the movie is a title song:
बादलों का नाम न हों, अम्बरों के गाव में, दिन भी अंधेरी रात हो,
[When there is no sign of the (watery) clouds in the village and the days are also like a dark night]
यही तो है मौसम आओ चले,
[This is the season, Come on,]
तुम और हम, दर्द को बांसुरी बना ले,
[Let's make our gloom a flute]
थोडासा रुमानी हो जाएँ....
[Let's be romantic....]

Email ThisBlogThis!Share to TwitterShare to FacebookShare to Pinterest
Labels: Thodasa