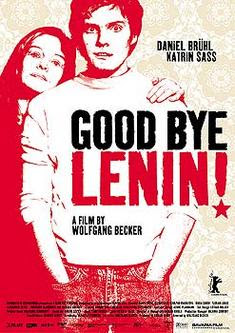 While learning German, we have an opportunity to see nice German Films with English Sub-titles (Which are essential for me) at Goethe Institut, Mumbai. These films are free to see for everyone and one can go to German Resource Centre at Churchgate and see these films in their office hours.
Some films out of them are really marvelous. 'Good bye Lenin' is one of them.
This film is a comedy which touches our heart occasionally. It tells us what a simple person can do maximum for his/her mother to have her last days happy.
It is a story of Alex Kerner who is a TV-mechanic in East Germany (Zonies). His father is a Doctor and goes to West Germany for a conference when Alex is small and lives there forever and doesn't come back to his family. The Stasi (Communist Police Force) harasses Alex's Mother about it. Therefore, to prove her faithfulness for the communist Govt., she becomes a hardcore loyalist. Her life is nothing but the Communism itself.
Eventually Alex grows up and finds that Communism is cruel and makes people slave. There is no political and thinking independence to the people. Therefore he decides to rebel against the ruling communist party.
One fine day, the mother sees that Police is beating Alex and other people brutally who are asking for the freedom to the press. And she collapses immediately. She doesn't even get the proper medical help timely as police is busy beating people.
Now she is in coma after a severe heart attack while the Berlin-wall which is dividing Germany breaks down and Germany is a one nation now. Alex's sister is working with Burger King and in love with a boy from West Germany (Wessie). Alex is also in Love with a Eurasian girl. But he loses his skillful job as many other Zonies and now must work as a Dish-TV seller.
After nine months Mother comes out of coma and asks Alex to take her home. The doctor warns Alex that her condition is critical and any simple excitement could also harm her. Therefore Alex must conceal the fall of Communist Regime from her.
Here the comedy begins. Alex and his friend pretend to the sick mother that the communist rule still exists in East Germany. And for that he does number of things which are humorous. For example he buys brand new pickle from the market for his mother and searches the old named bottles in the waste container, pretends that the coca-cola is originally East-German product and it's theme was stolen by capitalist countries like US, makes a forged news reels with the help of his clever technician friends similar to that of Communist regime, Sigmund Jahn who is a astronaut of one time and a taxi-driver in the new arrangement becomes East-German Chancellor in Alex's fake news reel who declares that doors of East Germany are open for the West Germans who are enthusiastic to see the so called great development in communist rule.
Slowly they try to convince the mother that Germany is now united nation. But suddenly her condition again worsens as she remembers about her husband who is living in the West Germany from last many years and she is now hospitalized. Alex decides to find out the Father. Searches him and bring him to her. Her last days are happy because of that and she dies satisfactorily in the illusion that communist party still rules the East-Germany.
This story though humorous sometimes makes us emotional and teaches us some basic human values which we are missing often.
That is why this is a most successful film of year 2003 in Germany.